Fruit flies, also known as Drosophilidae is a diverse family of flies that are often categorized by the broader term. They are often found in homes where food has been left to rot in the sink or other locations. They are also often used for research and studies that look at genetics and ecology. Fruit flies typically have a very short span of life, and show signs of aging over the course of just a few short hours. The factor that has the greatest determination on the lifespan of the fly is the temperature of the area in which they hatch. Warmer temperatures will make for a longer lifespan, while colder temperatures could shorten the lives of the flies. There are many types of Drosophilidae, and the family consists of a large melting pot of different species that are similar to one another.

Fruit flies are not typically classified as pests, and instead are merely bothersome. The flies typically breed in rotting material, which makes them most often found in the kitchen or in a dirty bathroom. They can appear seemingly out of nowhere with the appearance of rotting food or flesh and will leave just as suddenly as they came. They do post a threat to cherry, raspberry and fig farms because they tend to eat away at the fruits, causing more rot and eventually, more fruit flies. 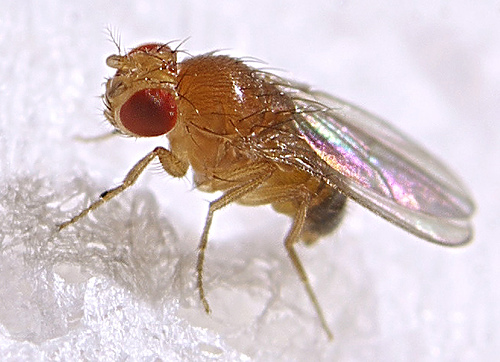 The body of a fruit fly is covered in small hairs that help to stabilize it as it flies and collect data about their surroundings. Their anal glands are contained in their wings and although their feces are not thought to be the safest of materials to have in the home, they generally do not pass and diseases on to humans. They do pose a slight health risk if they are allowed to be left in the home for an extended period of time. If you come back from a vacation and find that your kitchen has been infested with fruit flies, you may want to consult local professionals about how to handle the situation.

The most common tool used to get rid of fruit flies are traps. Although, in most cases the flies die once the rotting food has been removed, sometimes the infestations are serious enough to where traps are required. These traps generally work by making the fly think that it is landing on a food source when it is actually landing on a sticky surface that will not allow it to fly away.

Keep in mind that fruit flies are also attracted to soda and beer cans, which can add to a rotting food problem in the kitchen. You might want to consider washing out your cans or bottles with soap before leaving them laying around or close them up in an airtight bag before throwing them in your trash can. You will often see the largest concentrations of fruit flies around trash cans in the kitchen, because they contain large amounts of rotting food.